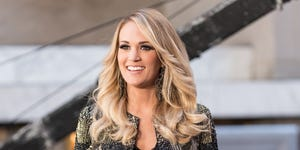 Carrie Underwood was scheduled to return back to the show where it all started and although things didn't go as planned, the show must go on.

The season finale of American Idol aired Sunday, May 22, with the "Before He Cheats" singer as one of the night's anticipated performers. After appearing on the show earlier in the season as a celebrity mentor, fans were stoked to learn that the country queen was returning to the stage where she reigned champion back in 2005.