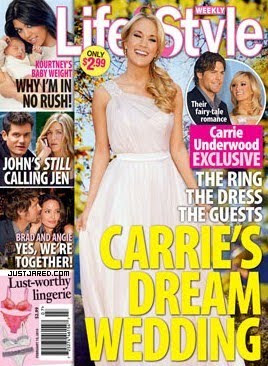 Underwood, who's from Oklahoma, has long proclaimed her love of fried Southern food, which was featured at her elegant wedding, along with festive cupcakes.

"The wedding was gorgeous," said a waiter who worked the event. "The food had a Southern flavor and there were delicious cupcakes. There was a lot of eating and a lot of drinking. It was a big party!"

The 5'3" Underwood, who now weighs about 110 pounds, slimmed down by following a low-calorie, vegetarian diet consisting of veggie burgers and soy-based sausages and running on the treadmill.

"When I gain weight, it's in the spare-tire area," says Underwood. "I've told trainers abs are a physical impossibility for me. And every single time, they're like, 'Well, we'll get you abs!' So do I have them? No! But they're as flat as they're probably going to get."

"Jillian Michaels' videos will kick your butt," says Underwood. "She's my trainer, and she doesn't even know it!"