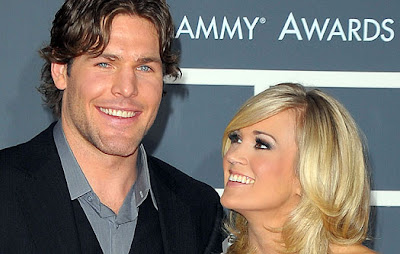 It was Chantilly lace for the pretty face of country music star Carrie Underwood as she walked down the aisle to marry NHL hockey player Mike Fisher on July 10 in Georgia.

The singer described her dress back in March, "It's just girly and pretty, and it's simple and glamorous at the same time."

Underwood's bridesmaids also donned Monique Lhuillier dresses for the lavish nuptials held at The Ritz-Carlton Lodge, Reynolds Plantation in Greensboro, Ga., according to the magazine.

Lhuillier's ultra-feminine wedding gowns have been selected by celebrity brides such as Pink, Ali Landry, and Britney Spears.

In February, the designer received prime-time exposure when "The Bachelor's" Molly Malaney wore one of Lhuillier's gowns -- a $45,000 strapless number accented with cascading rosettes -- for her televised California seaside marriage to Jason Mesnick.


Pictures of Underwood's wedding -- which took place under high security at the lakeside resort -- have not yet been released. (We're expecting to see the blushing bride in her gorgeous gown on the cover of this week's People.)

The couple released the following statement to People: "We could not feel more blessed to have found each other and have shared this day with family and friends who mean so much.." They signed it, "Mike and Carrie Fisher." Awww!

Fisher, 30, plays center for the Ottawa Senators. He proposed to Underwood last December with a 12-carat diamond estimated to be worth $800,000.

The couple dated quietly for about a year after meeting backstage at a 2008 Underwood concert in Toronto.

As StyleList previously reported, brides on a modest budget can sample Lhuillier's creations through her less expensive "Bliss" line.